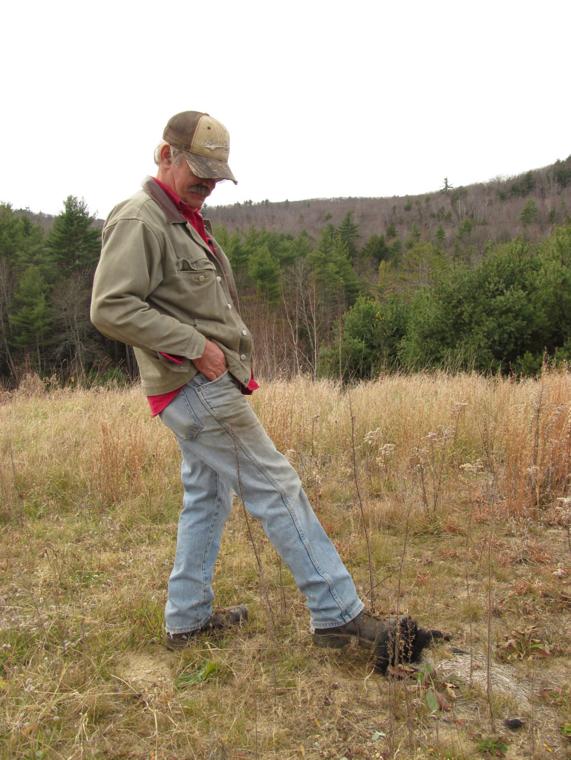 Troy Public Works Director James E. Dicey kicks at a piece of fabric at the Troy Mills Landfill Superfund site recently. Several scraps of fabric left over from the production of linings for cars were dumped on the property while the mill was in operation.

TROY — It’s one thing to have a Superfund site oozing hazardous waste in your town.

It’s another to have a Superfund site still oozing hazardous waste within 110 feet of the proposed path of a high-pressure natural gas transmission pipeline.

A recent federal report about the condition of the Troy Mills Landfill Superfund Site has members of the town’s conservation commission concerned not only about what toxic chemicals are still on the property — and where they’re going — but why U.S. Environmental Protection Agency officials didn’t address their concerns about the pipeline’s potential proximity to the site in their report.

While the pipeline route has yet to be finalized, recent maps show it passing within 110 feet — less than the size of a football field — from the site, following the high-tension power line corridor adjacent to it.

“This site is extremely vulnerable to any kind of nearby construction (digging and blasting) that could create preferential pathways for contaminated groundwater,” Sheila E. Ames, a Troy Conservation Commission member, said in an email to The Sentinel. “In the event of an explosion, buried carpet and fabric scraps could ignite and burn, emitting toxic fumes creating an extremely hazardous environment for firefighters and nearby residents.”

She said it’s of “great concern that the EPA is fine with having a 30-inch gas pipeline immediately adjacent to a Superfund site.”

Superfund sites are considered the country’s worst hazardous waste areas, their cleanup funded by the federal government through the Comprehensive Environmental Response, Compensation and Liability Act of 1980.

Tennessee Gas Pipeline Co., a subsidiary of Kinder Morgan, has proposed the Northeast Energy Direct project, which would carry fracked natural gas from shale gas fields in Pennsylvania through upstate New York, parts of northern Massachusetts and into southern New Hampshire before going to a distribution hub in eastern Massachusetts. The route would cross about 70 miles of southern New Hampshire, including Fitzwilliam, Richmond, Rindge, Troy and Winchester, and would carry up to 1.3 billion cubic feet of natural gas per day.

Tennessee Gas Pipeline Co. needs to have the pipeline approved by the Federal Energy Regulatory Commission to build it, and it’s in the pre-filing stages with the commission. The company’s officials say they expect to file the full application for the project with FERC on Friday.

Troy resident Martin J. Barry, also a conservation commission member, said in an interview that the group submitted 149 comments to the Federal Energy Regulatory Commission about the pipeline. In one of those comments, he said, conservation commission members asked the agency to make sure Kinder Morgan officials ran an analysis of the potential problems that could arise from mixing the chemicals from the natural gas in the pipeline with the hazardous waste materials at the Superfund site.

“That raises a lot of concerns for us,” he said.

It not only puts the environment at risk, but also the lives of residents and firefighters who would have to respond should there be a pipeline emergency near the site, he said.

Ames and Troy Conservation Commission Chairwoman Marianne Salcetti were quoted in the EPA’s report as stating that Troy is about halfway between towns in Massachusetts and New Hampshire where Tennessee Gas Pipeline Co. proposes compressor stations along the pipeline, and it’s likely the Superfund site would be in the path of “blow downs,” the process by which natural gas is released into the air to reduce pressure. With that release comes methane and other chemicals left over from the fracking process, they said.

“The possible interfacing of these various chemicals with contaminants such as toluene, phthalates and alkylbenzenes in the site are of concern, along with carbon dioxide, methane (and) ethane as well,” they said.

A history of waste

The Troy Mills Landfill Superfund Site covers an undeveloped swath of land just west of the Cheshire Rail Trail near the town’s border with Fitzwilliam. It includes 2 acres where Troy Mills used to dump drums of waste liquid and sludge. That area is within 17.8 acres of where groundwater is monitored for contaminants.

To the north of the property is an 8-acre solid waste landfill that also was used by the mill.

The now defunct Troy Mills, near the center of town on Monadnock Street, originally made horse blankets before becoming a leading producer of automotive fabrics. It closed in 2001 when its owners filed for bankruptcy.

Troy Mills started using the landfill in 1967 as a place to dump not only the full drums of hazardous waste, but empty and damaged ones, as well as waste acrylic fabric, wood scraps and broken tools.

In 1980, the N.H. Department of Environmental Services ordered the company to stop dumping the drums. The state agency also required the company to dig at least three test pits in the area for collecting groundwater samples. A year later the EPA became involved, and an investigation of the site found contamination in groundwater, leachate, surface soil, surface water and sediment.

By 1999, an approximately $1.7 million plan was in place from a consultant to clean up the property, but Troy Mills officials decided a year later to delay the work because of “unfavorable corporate financial and market conditions.”

Then the owners declared bankruptcy.

During 2004-05, EPA contractors removed about 7,670, 55-gallon drums that had been dumped at the Troy Mills Landfill Superfund site, flammable liquids and contaminated soil and sludge. They also built three trenches and installed a 2-foot-thick soil cap over the excavation area.

According to the EPA’s second, five-year review, released in September, removing the drums eliminated the source of contamination, but there are two plumes of groundwater contaminants moving from the northern edge of the drum disposal area toward wetlands and Rockwood Brook on the west side of the property. Rockwood Brook, which flows south to north, feeds Sand Dam, a town recreation area.

Most of the chemicals found in the plumes were petroleum-based, including DEHP, chlorinated solvents, naphthalene and 1,2,4-trimethylbenzene.

Ames, who has a bachelor’s degree in environmental science, said chlorinated solvents are suspected of causing cancer and are harmful to aquatic organisms. They’re difficult to clean up, she said, as they tend to sink to the bottom of groundwater systems and then disperse in complex plume patterns.

DEHP is used in plastics, found everywhere in the environment, attaches strongly to soil particles, and doesn’t evaporate or dissolve easily, she said.

Twenty of the 27 monitoring wells from which water samples were collected in November 2014 contained manganese at levels that exceed what environmental officials determined was acceptable for the site, according to the report.

High levels of manganese can be toxic for children, Ames said, especially in their brain development, and the mineral can’t break down in the environment.

Troy Conservation Commission members also told EPA officials they’re concerned about the effect all these toxic chemicals could have on people trespassing on the site and efforts to address contamination on the property, according to the EPA report.

The property is marked by two gates, one of which was broken during a visit there last week. The area is a hillside covered in tall grass and shrubs, dotted with monitoring wells and crisscrossed by dirt trails and gravel drainage areas. On the west side of the property, hay bales held down with wooden stakes run along the wetlands border. To the south, through a row of trees shedding their leaves, are high-tension power lines, resembling a giant ski tow.

In their report, EPA officials wrote they will look into potentially installing additional fences and signs, in response to concerns about people trespassing on the site and using it for recreational activities, such as riding snowmobiles and all-terrain vehicles. They will also look into further limiting exposure to contaminated soils on the site through administrative and legal methods, according to the report.

Another problem they plan to address is the possibility that contaminated groundwater within the wetlands may have been dispersed even farther because of flooding from beaver damming, the report said.

“The EPA needs to do more than consider this,” she said.

Richard W. Hull, remedial project manager for EPA Region 1, which covers New Hampshire, said the second, five-year review of the site is a mechanism for evaluating the management of the property, its condition, how the remedies for addressing contamination are working, and if there needs to be any changes made to those plans.

The first, five-year review was completed in 2010. The reviews are required by federal law for sites where the levels of hazardous substances, pollutants and contaminants are above what is safe for human exposure.

Hull said the pipeline issue was brought up during interviews with town officials, but the matter is not something EPA staff would normally address in a five-year review. The comments town officials made to FERC about the pipeline weren’t part of the EPA report on the Superfund site.

The Federal Energy Regulatory Commission, not the EPA, has the final say over whether the application for the Northeast Energy Direct pipeline will be approved.

“From my standpoint, it’s not part of our site remedy at this point,” Hull said. “From what I understand, a project of this nature would go through an environmental impact review both on the national and state levels. It’s kind of a separate program we don’t deal with.”